TECH giant Apple has been given the green-light to build an €850m data centre in Co Galway. 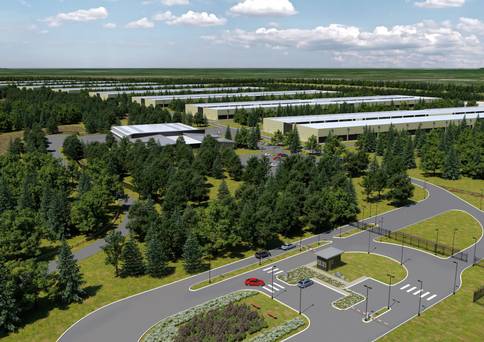 An Bord Pleanála has granted planning permission for a 24,500 square metre data centre which will help run online services including the iTunes store, App store and Siri.

Among the reasons why the project was approved included the “projected demand” for data storage in the future, coupled with the “economic and operational rationale for the clustering of data storage capacity on one site,” the board said.

It also noted the difficulties in identifying suitable sites required for the massive developments, which must be linked to the national grid.

The plans, on a 197-hectare site near Athenry owned by State forestry company Coillte, were approved by Galway County Council in September last year, but appealed to the board.

The plan involves the construction of a data centre, an administration building and associated works. Some 300 people would be employed during construction, and 150 after.

Ireland beat competition from 18 other countries to secure the €850m project. While just one data centre is currently planned, the company has said that by 2031, eight buildings of almost 25,000 square metres each could be in place to cater for the “rapid expansion” in wireless communications, entertainment and  networking.

Data centres are essentially large halls with an uninterrupted electricity supply which store data from smartphones, tablets and computers including images, video and documents.

The data centre will be powered by renewable energy, but 18 diesel generators will be provided in the event of a power shortage.

Part of the planning application included construction of an electricity sub-station, which will connect the plant with the national grid. This was also approved.

In its decision, the board said the development would not have a “significant effect” on protected nature sites, and that the effects of the proposal had been properly addressed.

“The proposed development would, therefore, be in accordance with the proper planning and sustainable development of the area.”

The decision is subject to 20 conditions, including a reduction in the number of car parking spaces to 100 for staff, seven for visitors and eight for disabled access.

Plans for an amenity walkway, open to the public, must also be agreed with the local authority.

The development will also include 2.5km of walking trails with areas for seating which will open the site to the wider public.

ABP ruled that prior to commencement of the development, construction and operation stage details of the proposed amenity walkway must be submitted to and agreed in writing with the planning authority.

It also ruled that the lighting system must be at a low level appropriate to bats and ensure no light spill into adjoining properties or the public road.

During the oral hearing, Apple also proposed the inclusion of a pedestrian and cyclist link between the development and the nearby town of Athenry as part of a Mobility Management Plan for the development. The company will also consider a shuttle service between the centre and Athenry Train Station.

ABP said this Mobility Management Strategy should be agreed prior to the opening of the development and provide for incentives to encourage the use of public transport, cycling, walking and car pooling by staff employed in the development to reduce and regulate the extent of staff parking.

He said he was confident that following the investment of €850m in the area, other companies around the world will follow in their lead.

“It is significant in terms of what it says to the world. This is a development that needs high quality broadband, high quality power supply and this local economy has shown it can deliver. It’s a very strong endorsement for the whole region and this is the beginning of what I hope will be a very significant ICT cluster,” he said.

“I expect the Apple development in Athenry to get underway very shortly. The Danish data centre is already under construction and Apple here in Ireland were simply awaiting the green light from An Bord Pleanala. I am aware that they are ready to move on site.

“This is a huge boost for the west and a great example of what is possible with the right policies when it comes to job creation. We have all the necessary ingredients to develop one of Europe’s largest ICT clusters right here in Galway. We have bright, well educated and ambitious young people. We have excellent schools and third level institutions and we will shortly have a flagship global company basing itself right in the heart of our county. The future looks very bright indeed” added Deputy Cannon

To keep updated on Arcon Recruitment Jobs please click on the link – www.arconrecruitment.com

2 thoughts on “TECH giant Apple has been given the green-light to build an €850m data centre in Co Galway.”